CSC - IT Center for Science Ltd. is establishing the National Research Information Hub at the behest of the Ministry of Education and Culture. The planned service will serve as a warehouse for metadata on, for example, publications, research data, research infrastructures, researchers, projects/projects and research groups.

The amount of different research being produced is increasing rapidly along with the advent of research digitalisation and open science. The number of the systems where the produced research outputs and other information are stored is alike increasing, resulting in wide range of separate and disintegrated information systems. The National Research Information Hub targets to integrate and connect the currently disintegrated systems and registers to complement each other.

The sensible and easy management of research outputs requires a uniform specification for research metadata and its seamless processing.  Metadata is used in research work and administrative processes related to research, such as information retrieval, funding applications and reporting, publishing, the compilation of statistics and other dissemination of research data.

The rationalisation of information flows lightens the administrative workload and makes the information more accessible and easier to find.  This will benefit researchers, research organisations, funders and parties making decisions based on data. In addition, research outcomes will be more accessible to citizens using it. 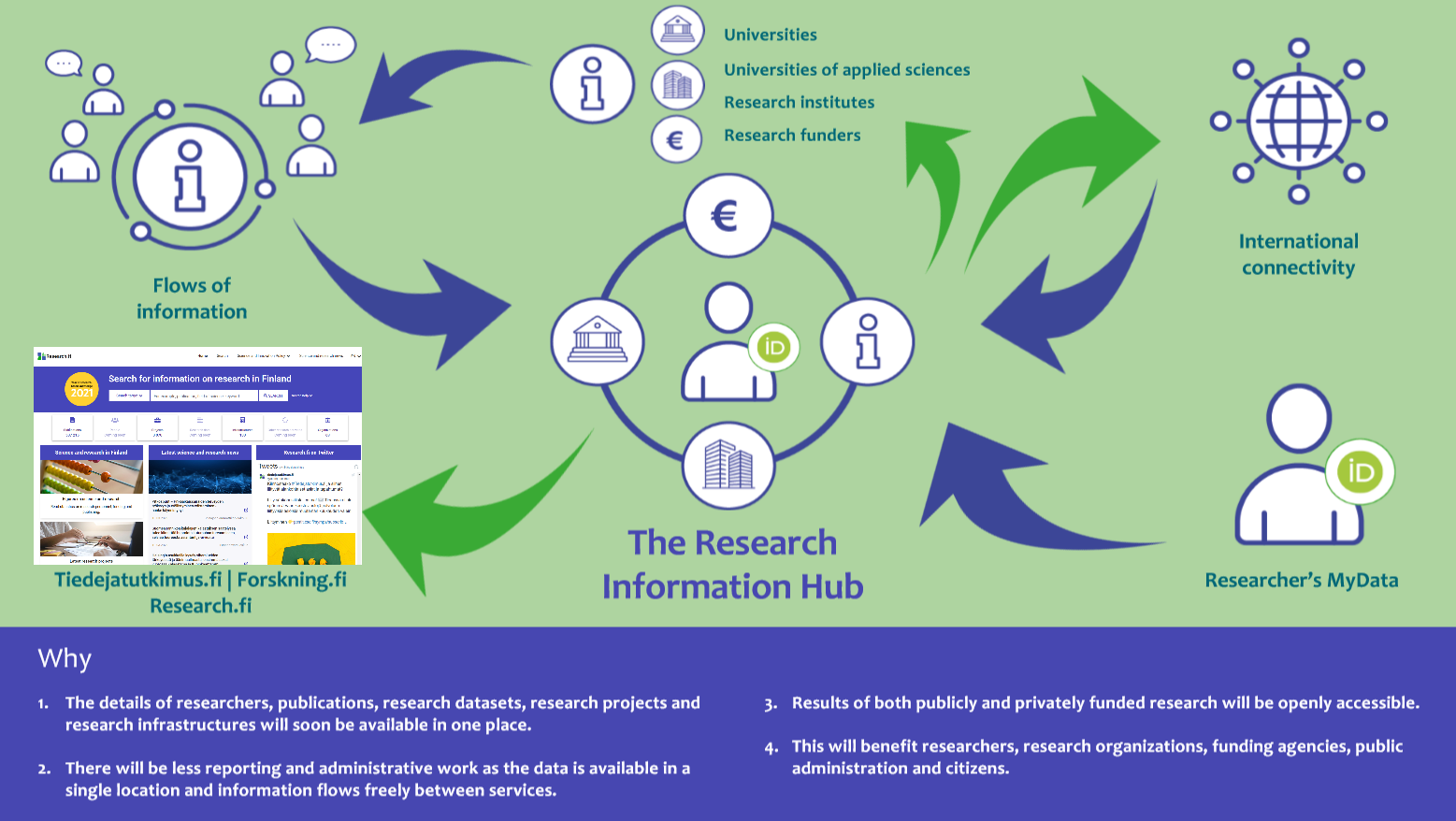 On the mailing list, we inform the subscribers (in Finnish) about events and other current issues related to the National Research Information Hub project.

tiedejatutkimus@csc.fi for questions or other enquiries concerning the National Research Hub project or its public Research.fi service.

hanketietovaranto@csc.fi for questions or other enquiries concerning research funding or funding decisions.

@tiedejatutkimus for tweets (mainly in Finnish) on the Research.fi service's current issues.

Authorities, research funders, higher education institutions, research facilities and other parties conducting research are constantly collecting enormous amounts of metadata on research being conducted in Finland. This metadata is collected in several different locations, such as:

For the time being, information has been difficult to locate and use, and databases and information systems containing metadata are not linked with one another. Anyone needing data has to search in several different places, because there is no one cohesive access point for research being conducted in Finland where the information is organised in easily accessible and understandable entities.

Considerable resources are used in the collection of information. At the national level, the use of information has thus far primarily put an emphasis on its use as a criterion for the distribution of funds as well as in the evaluation, steering and statistics compilation of research.

Researchers use numerous online services, which also collect information on research. However, at the moment, researchers are still forced to enter the same information, for example, on their publications, in several different places, such as research data systems, publication archives, CV services, researcher funder systems and various impact services. In addition to this, when changing organisations, they may also have to re-enter their data in the systems of several different organisations.

The National Research Information Hub can be used to link the currently separate data warehouses and databases with one another. Consolidating the metadata of these discrete data warehouses into a single research information hub will provide a single, uniform, open and comprehensive access point for all the research being conducted in Finland, and the information will be available for everyone*. The goal is not to increase the amount of reporting and administrative work, but rather to compile and share existing information.

The research information hub is not a single website - it is a service entity, in which research metadata is collected and interlinked in a form that allows it to be easily used in any other service.

Using standardised terms and definitions, the research information hub compiles and shares commensurate, open and linked data with other services.  The machine-readable interfaces of the service allow for the seamless transfer and use of information in different services and processes, thus enhancing the commensurability of information and reducing the manual entering of information in several different places.

In the research information hub, research metadata can be examined from a variety of perspectives, thus making it easy to gain access to data sources.

* some limitations may be placed, e.g. personal research information details