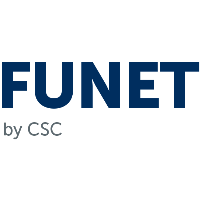 History of Funet in brief

CSC had been offering remote access services to mainframes since early 1970's. Many initiatives for a national research and education network were made with little success.

The history of Funet starts in December 1983, when Finnish Ministry of Education started the Funet project. The project was later merged to CSC.

During the first years, dominant protocol was Decnet. International connectivity via EARN was established in 1985 (9.6kbps). Use of TCP/IP in Funet started in 1987. OSI protocols never played a major role in Funet.

In 1988, Funet was connected to the NORDUnet network and internet using Cisco routers. IP protocols soon became dominant, although other protocols were still supported.

FTP server NIC.FUNET.FI stared in 1990, and in 1991 it becomes the "home" of the original Linux operating system. First www server was set up in 1992.

Funet CERT was established in 1995.

In 2001, first Juniper routers in Funet, enabling 2.5Gbps connections within Funet backbone and towards NORDUnet.

Native IPv6 support in Funet backbone was implemented in 2002.

Transition to fiber-optic Funet started in 2008.